About the book: The book concludes with the republication of the seminal and highly influential Relations With Alien Intelligences The Scientific Basis of Metalaw by Dr. Ernst Fasan, first published in 1970. Scholar, author, and attorney Ernst Fasan was among the original space lawyers, a small, pioneering group of visionaries who recognized that the movement of man into space must be accomplished without the shackles of history and in an environment free from the threat of the use of space as an instrument of armed aggression.

National Space Law in China: an overview of the current situation and outlook for the future 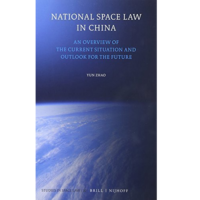