Professor Anne Cheung and Dr. Clement Chen are currently studying China’s Social Credit System and its legal implications. In an interview in March 2017 with ZDF, the largest TV station in Germany, they shared their views on the background and the unfolding of the Social Credit System, and discussed the system’s profound implications of personal data protection and citizens’ right to privacy (please see the documentary , “The Data Jungle”).

Cheung and Chen pointed out that the Social Credit System is an ambitious project that aims to score each and every Chinese citizen according to his or her credit-worthiness and social behaviours. Not only will online and offline behaviours of citizens be counted, tracking and rating will be done by both the government and private companies. The sharing of credit records between different parties, together with the application of big data technologies, have paved the way for a ubiquitous and panoptical regime of social control.

They have also noted that the government has designed platforms to disclose certain categories of citizens’ illegal behaviours, and cautioned the unfairness involved in lack of legal remedies for mis-information and mis-use of information. Regardless whether the information is accurate or mistaken, serious concerns of privacy, anti-discrimination law and fair information practices are raised. 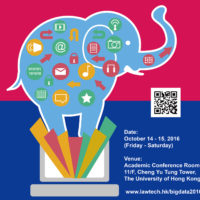